Democrats and many of their allied organizations — including “Better Idaho,” which as we noted last week is a front group for the national left-wing ProgressNow and Democracy Alliance networks, and is running deceptive ads against Republicans — support a sweeping gun ban that would make illegal many, if not most, of the guns being sold in America and Idaho today.

More than 90 percent of the Democrats in the U.S. House of Representatives have signed on to a bill that would ban:

Any semiautomatic pistol with:

Any semiautomatic rifle with:

A capacity of more than 10 rounds (“except for an attached tubular device designed to accept, and capable of operating only with, .22 caliber rimfire ammunition”)
A detachable magazine
A forward grip
A pistol grip
A threaded barrel, if it has a detachable magazine

Any semiautomatic shotgun with:

More than 60% of U.S. Senate Democrats have signed on to similar legislation.

As anyone who knows anything about guns realizes, these bills would ban a huge percentage of firearms. Such a ban — supported by the majority of Democrats and extreme left groups such as “Better Idaho”/ProgressNow — is not only a threat to Idahoans’ 2nd Amendment rights, but also to Idaho’s economy and many Idaho jobs.

Idaho ranks first in the nation for jobs in the firearms industry. We are home to many firearms manufacturers and sellers. A ban of this scope and magnitude would throw people out of work, hurt those workers’ families, and damage our economy.

On top of wanting to make illegal so many guns and gun parts, the sister organization of “Better Idaho” in California wants to force banks and credit card companies to stop doing business with gun manufacturers and retailers. This would also devastate Idaho’s jobs and economy.

The Democrats and their allies, including “Better Idaho”/ProgressNow, keep claiming that they don’t want to take our guns. The facts indicate otherwise. 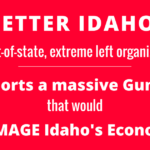 What a gun ban could mean to Idaho’s people & economy

April 10, 2018 Democrats and many of their allied organizations — including “Better Idaho,” which as we…